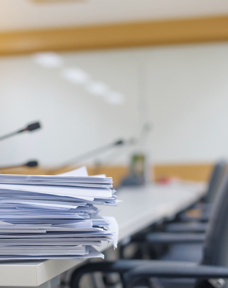 Three years ago, in In re Stryker Rejuvenate & ABG II Modular Hip Implant Litigation, lawyers forged a $1 billion global settlement on behalf of nearly 4,000 people with defective hip implants. The final deal looked like many mass tort settlements -- a private settlement facility, using streamlined procedures, would compensate thousands of victims. But the process the parties used to get there did not. The parties did not try a single case. Nor did they head straight to the bargaining table to resolve their dispute in one fell swoop. Rather, parties relied on what the court called an "unprecedented" series of "bellwether mediations."

Bellwether mediations offer a new tool for courts confronting large influxes of cases, while raising new questions about the role of juries and judges in mass dispute resolution.

For years, courts have relied on "bellwether trials" to resolve large numbers of similar lawsuits. In a bellwether trial, the parties select a small group of cases for jury trial out of a larger pool of similar claims. Steering committees of plaintiff and defense lawyers to then use information gleaned from those trials to resolve the remaining cases. Bellwether trials have been used in many high-profile cases -- from Vioxx to General Motors's defective ignition switches. They have become incredibly popular, too. In 2004, the Manual for Complex Litigation, which provides the influential guidance for federal courts confronting big cases, endorsed bellwether trials. Today, case management orders in federal multidistrict litigation often include some kind of bellwether trial plan.

Still, bellwether trials have not completely lived up to their promise. In fact, bellwethers rarely sound much of a bell at all. Because of the substantial risk and expense associated with "bet-the-company litigation," parties rarely conduct more than a handful of bellwether trials and get very mixed results when they do. Many end up settling on the eve of trial.

This is not to say bellwether trials lack value. They continue to serve a valuable purpose by creating a deliberative, democratic process to determine parties' rights and responsibilities -- not to mention practical leverage to get parties to the bargaining table. But, over the years, bellwether trials have struggled to increase representative outcomes, promote input, and curb strategic behavior between and among counsel.

Enter bellwether mediation. In bellwether mediation, no jury decides the merits or value of a case. Rather, the parties -- supervised by the court -- rely on a structured sample of mediated settlements involving representative plaintiffs. The different settlement outcomes, much like a series of bellwether trials, are intended to offer the parties crucial "building blocks" of information to globally resolve the remaining cases. In so doing, the process attempts to (1) yield important information about claims, remedies, and strategies that parties often would not share in preparation for a high-stakes trial; (2) avoid outlier verdicts that cause negotiations to break down, threatening a global resolution for all the claims; and (3) build trust among counsel in ways that do not usually occur until much later in the litigation process.

In In re Stryker Rejuvenate & ABG II Modular Hip Implant Litigation, the bellwether mediation process took place in two stages over 18 months. First, the court and lead attorneys each selected a representative sample of cases based on the parties' age, injury, surgeries, and postoperative recovery. The low cost of mediations, compared to trial, meant that the parties could conduct many of them. Accordingly, a wide variety of plaintiffs and their lawyers participated directly in over 40 separate, individual, and confidential mediations over 18 months.

Based on the success of those mediated outcomes, the court then appointed a mediator to commence a new phase of global settlement talks. Anonymous data from the individual mediations were shared with negotiating committees of plaintiffs and defense lawyers. They in turn relied on each individual settlement to establish benchmarks and variables for determining payouts to the broader group.

In the end, the process proved very successful. The mediators and parties to the global talks said that their experiences with individual mediations helped them "see beyond the case file" and identify a range of factors that may have been otherwise overlooked. According to the lead plaintiffs counsel: "We got a read on how both sides were valuing the cases early on, began to identify some of the common situations that plaintiffs experienced and an in-depth understanding of the various types of injuries and procedures the various plaintiffs had gone through." In the hearing to announce the final settlement, the parties, mediators, and judges praised the bellwether settlement process for producing more relevant information about settlement values, involving more plaintiffs in the settlement process, and establishing more trust between the lawyers than in high-stakes bellwether trials.

After reaching the global settlement, participating lawyers took care to emphasize that bellwether mediations are not for everyone. They observed, however, that bellwether mediation remained a valuable option in future cases, where (1) parties are already open to settlement, (2) judges and parties can coordinate and transparently share settlement information in state and federal court; and (3) diverse groups of law firms and plaintiffs actively participate in the mediation process.

The Role of the Judge and Jury

The court's complete embrace of a "bellwether settlement" scheme raises new questions for juries and judges. After all, what do bellwether settlements mean when the procedures and outcomes lack any connection with a jury trial? By dispensing with the jury entirely, the parties arguably give up procedures that are thought to encourage vigorous advocacy before neutral fact-finders. The prospect of a jury trial also promotes fidelity to law by ensuring that settlements correspond to the merits of the dispute, as well as provides a democratic bulwark against unelected judges who may harbor biases about what makes for a fair outcome.

Nevertheless, bellwether mediations can benefit parties in other ways. Bellwether mediations help counsel understand how beneficiaries of a global settlement value different outcomes, while building trust among diverse law firms in high-stakes litigation. Moreover, they help avoid lottery-like verdicts, which bear little relationship to case values and do not shed light about how to fairly resolve thousands of other similar cases.

Bellwether settlements raise even bigger questions about the role public courts should play in the overwhelming number of cases resolved through private settlement practice. Judges are traditionally thought to perform three important functions in the civil justice system: (1) hear adverse claims, (2) supervise controlled fact-finding, and (3) interpret law. But what is left for judges to do when big cases push them outside their traditional role as adjudicators?

Perhaps bellwether settlements represent another way that judges play an "information-forcing" role in aggregate litigation. In mass settlements, judges can influence the quality of settlement negotiations by regulating the ways that parties create, record, and share information. In much the same way that Stephen Yeazell once called for a "NASDAQ for lawsuits," bellwether mediations in the Stryker litigation produced a judicially-supervised settlement exchange -- one designed to help the parties set ground rules, open the lines of communication between far-flung law firms, and in the process, make more reasoned trade-offs in pursuit of a global settlement.

Adam S. Zimmerman is a professor of law at Loyola Law School, Los Angeles. His essay derives from "The Bellwether Settlement," which recently appeared in the Fordham Law Review.