If a tree falls in a forest, is there a lawsuit? 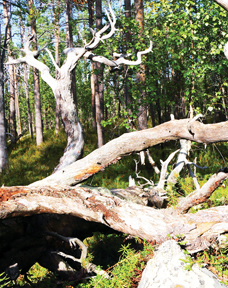 Despite a recent win in appellate court, attorneys hoping that drought-ridden forest campgrounds and trails could be packed with potential lawsuits may be barking up the wrong tree because of powerful government immunities.

Timothy G. Tietjen of Rouda Feder Tietjen & McGuinn recently scored a rare win overturning a summary judgement motion granted to San Mateo County based on immunity. However, it came based on a narrow exception to California Gov. Code 831.2.

The law provides public entities with immunity to liability for injuries caused by "natural condition of any unimproved property."

Tietjen's client's pelvis was crushed by a 75-foot diseased tree with a massive hole in it. Tietjen beat the immunity by proving the campground was "improved" and that the county contributed to the tree's demise.

"There was substantial evidence that the improvements that were made contributed to the conditions that led to it being infected," Tietjen said.

He also said that any purely natural event, no matter where, is covered. That means public entities bear no responsibility for a tree with a cracked branch in the center of a campground, so long as the crack happened naturally.

That poses a danger after a historic drought. Studies released by sources such as the University of Massachusetts

"It doesn't matter I they have knowledge. They can have actual knowledge of a dangerous tree, and still escape liability if they did nothing to cause that danger," Tietjen said.

He noted another case in which a tree fell on a different camper, but because of natural causes. The tree was outside the campground, but fell in and injured his client severely.

"They had the expectation that the campsite would be safe, and a rotten tree outside the campsite but tall enough to fall in," he said.

Tietjen and Molly McKibben of Greene Broillet & Wheeler, LLP said they understand the purpose of the immunities. However, they may cover too much, especially in campgrounds that charge fees for use.

"I understand the impetus behind these laws. We live in the most beautiful state in the country, and it would be a shame if parks weren't open because it's cost prohibitive to make every square inch safe," echoed. "That said, it's not a burden to ask them to do something in a reasonable manner."

"In my opinion, I believe that if you create a campsite and invite people to it, and charge them, there should be a reasonable expectation that you ensure it's safe," Tietjen said.

McKibben also said that the immunities represent a shift in who takes on the risks in a public park.

"They were created with the recognition that we're essentially going to widen the idea of the assumption of risk to the public, where the tradeoff is access to these lands. It's a sacrifice," she said.

She also said that plaintiff's attorneys should be wary of expanded applications of immunity, such as California Gov. Code 831.4, "trail immunity". The law provides liability immunity to public entities for injuries sustained on "unpaved roads" which provide access to recreational activities like camping or fishing.

According to McKibben, in some places the immunity has been deployed for bike paths, boat ramps, or beach boardwalks, which is not the intended spirit of the law.

Like natural condition immunity, the solution to trail immunity is similarly narrow, but the definitions of that solution are less clear.

"Trail immunity, basically the only way you're going to get out is to argue is it didn't happen on the trail," she said.

McKibben said that part of the problem is a lack of published opinions in the plaintiffs' favor, and that most of wins are unpublished.

"One really big issue is that published cases tend to be defense cases. The plaintiffs' bar needs to make sure that when there is a good result, we try to get it published," she said.

Tietjen said that the fact-driven nature of immunity means that the only way forward right now is to look at them individually, rather than as an overall issue.

"It's clear that the law will never get there, so we work on each case individually," he said.

"There have to be some guidelines, and if you make improvements to the park, you have a responsibility," he said.

"To own property, you should have an obligation to keep it safe. Private owners have that responsibility," McKibben said.

"If you're designing this, and building this, and have people inspecting this, I just don't think you should be immune from responsibility."