The cost of suing business 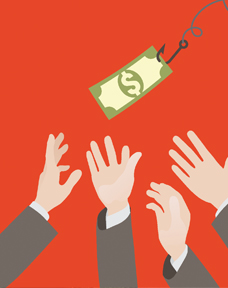 To listen to the U.S. Chamber of Commerce, one would think that class actions are the most significant scourge on business ever conjured up by man. In brief after brief to the U.S. Supreme Court, the Chamber of Commerce and other business amici tell the same story: Meritless class actions, filed by rapacious plaintiffs' attorneys for the ostensible benefit of consumers, employees, and shareholders, are so devastatingly expensive to defend against, and threaten such financial devastation if plaintiffs prevail, that corporate defendants cannot help but accept "blackmail settlements" that harm both businesses' bottom lines and society at large. The Supreme Court appears to have premised several recent civil procedure decisions on this depiction of the costs and burdens of class action litigation. But available evidence calls into question the empirical support for this story.

Available evidence also undermines assertions that class actions impose debilitating costs on corporate defendants. Although businesses spend a great deal of money on class actions, they appear to spend even more money suing each other. Businesses sue other businesses far more often than classes of plaintiffs sue businesses, and available evidence indicates that non-class, intra-business disputes may be as expensive or, perhaps, more expensive to defend against. One may believe that all litigation is too expensive. But if class actions are no more financially devastating to businesses than non-class, intra-business disputes, there is no basis to single out class actions as particularly deserving of limitation.

I am also skeptical of assertions that class action claims are regularly meritless and plaintiffs' attorneys regularly place their own interests above those of their clients. Although there are examples of these types of claims and attorneys, there is no reason to believe that class actions are more often frivolous than other types of cases or that plaintiffs' attorneys who bring class actions are any more unscrupulous than other members of the bar. The very businesses that complain about meritless class actions sometimes bring questionable claims against their competitors. And just as plaintiffs' class action attorneys have been criticized for focusing overmuch on lining their own pockets, attorneys who represent corporations have been criticized for valuing their fees above their clients' best interests.

Finally, I believe that business amici and the U.S. Supreme Court underestimate the costs of restricting plaintiffs' access to the courts. Closing the courthouse doors limits plaintiffs' abilities to seek redress, prevents public disclosure of information about defendants' misconduct, and even inhibits defendants' abilities to learn about their own behavior from the lawsuits brought against them. Business amici and the court should, but do not, take account of the individual and societal harms associated with limiting redress for plaintiffs.

But one thing is clear: The Supreme Court should not rely on anecdote, exaggeration and fabrication when interpreting the Federal Rules of Civil Procedure. The court should not heed advocates' and amici's assertions about the effects of class actions and other procedural features when no empirical evidence is available to support those assertions. Instead, the court should defer the assessment of these claims to other entities -- including Congress and the Judicial Conference -- that are better situated to examine the effects of these rules on litigants and adjust procedural rules accordingly. In the alternative, the court should place more faith in nondispositive procedural tools -- let's call them "pathway" rules -- to address concerns about excessive cost, delay and unjust outcomes without unduly prejudicing plaintiffs. The Supreme Court has, in fact, followed both of these approaches in recent decisions. Perhaps closer scrutiny of available evidence regarding the costs of suing business -- and fuller acknowledgement of the limits of our knowledge about these costs -- would encourage similar decisions in years to come.

Joanna C. Schwartz is vice dean for faculty development and professor of law at UCLA School of Law. This was adapted from her article, "The Cost of Suing Business," 65 DePaul Law Review 655 (2016). (Clifford Symposium).