We send them there. We break them. Then we take away their benefits.

In a former life, Justice Moore served as a combat nurse in Vietnam in the Army Nurse Corps. She was awarded the Vietnam Service Medal, the National Defense Service Medal, and the Cross of Gallantry with Palm. She is a member of the Vietnam Veterans of America. Since 2008, she has chaired the Judicial Council's Veterans and Military Families Subcommittee. For nine years, she served as a mentor in a Veterans Treatment Court, primarily to women veterans. In 2015, her book "Gender Results" received a Benjamin Franklin award. (Cool Titles, 2014) 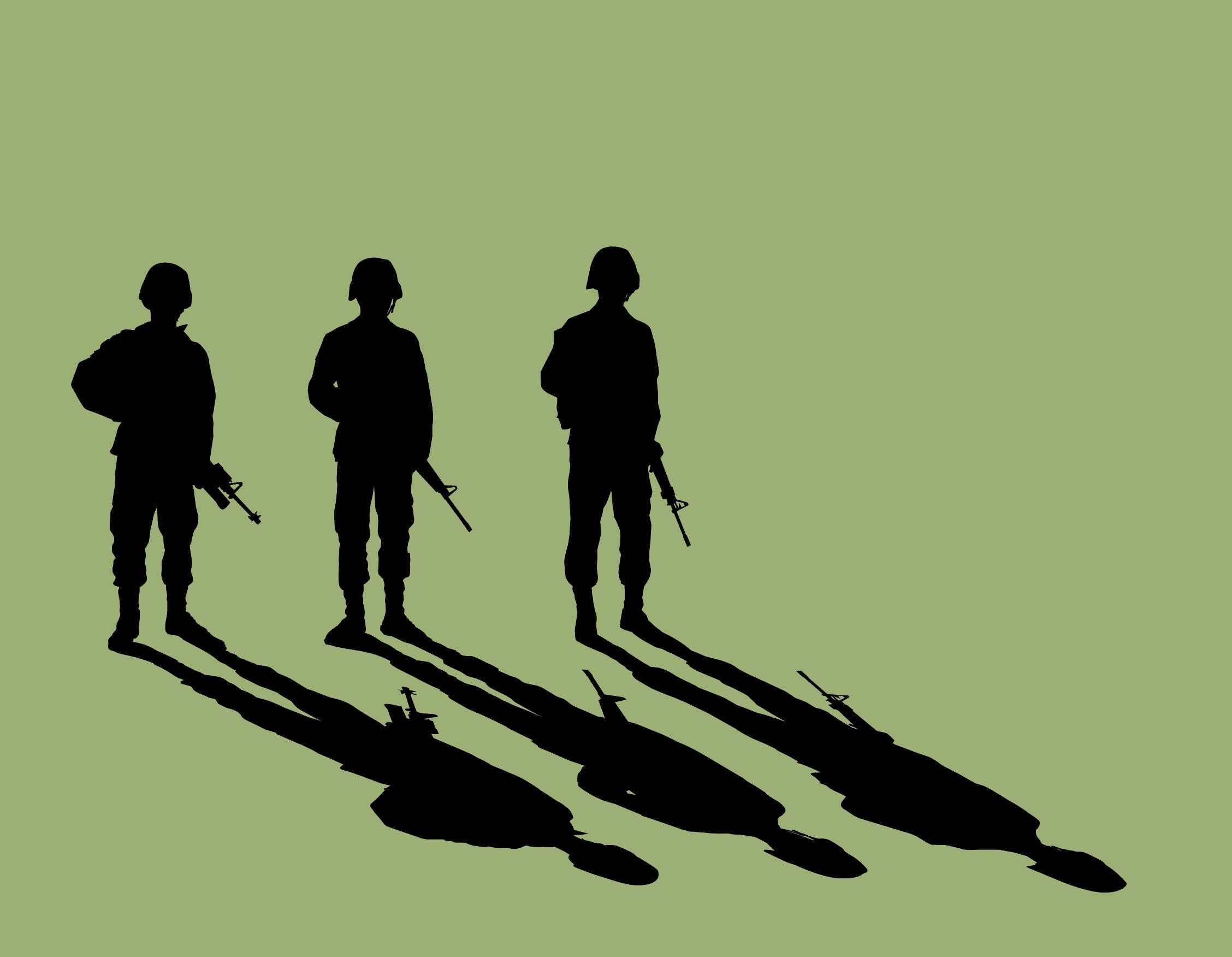 Understanding that post-traumatic stress disorder, traumatic brain injury and other combat maladies may increase risky, sometime violent, behavior, California courts, legislators and lawyers, along with various state and county agencies, have cobbled together a process to deal with United States military service members and veterans who commit crimes while suffering from these conditions. Basically, California understands we should not turn our backs on those who were hurt while serving our country.

We now have 34 Veterans Treatment Courts in California. In those courts, the person, who is either an active duty member of the military or a veteran of military service, must plead guilty and then earn his or her way back to a clean record. And those courts work; the typical recidivism rate for convicted criminals is somewhere around 77%, but a veterans' court study revealed that veterans recommit only 10.4% of the time. Also in California, there is a way for any service member or veteran convicted of a probation-eligible crime to avoid incarceration, even when the person is not in a Veterans Treatment Court. Plus, we have a process for diverting all active duty and veteran misdemeanants from prosecution.

Thus, it is perplexing when a service member literally begs a judge not to contact his or her commanding officer in order to coordinate civilian and military treatment. A typical scenario involves a member of the military, in the midst of sorely needed treatment, who receives deployment orders. Realizing that the soldier may represent a danger to self or others, the judge or a member of the court's collaborative team would like to contact the soldier's C.O. to try to either delay deployment or connect with a military contact to make sure the soldier's treatment is not interrupted. "You can't do that," the soldier pleads to the court, "They'll dishonorably discharge me and I'll lose my benefits."

It was in 1944 that Congress passed what became known as the G.I. Bill providing education and other benefits to facilitate readjustment of soldiers to civilian life. The benefits were intended to reflect respect for the sacrifices made by our armed forces who took on the responsibility of protecting all of us. See Michael J. Wishnie, "'A Boy Gets Into Trouble': Service Members, Civil Rights, and Veterans' Law Exceptionalism," 97 B.U. L. REV. 1709 (2017).

Could our military actually be discharging soldiers who suffer from a combat condition because the soldier is receiving treatment for that condition? And even if the military concludes the soldier is not fit for service due to the condition or because the soldier committed a crime as a result of that condition, why must the discharge be less than honorable? After all, the condition developed as a result of military service. A less than honorable discharge usually involves a loss of some or all benefits, such as the valuable education benefit, that likely induced the soldier to enlist in the first place. 38 U.S.C.A. Section 5303; 38 C.F.R. Section 3.354.

It is troubling to think that we tempt our young people to enter the military by promising them a free education and other services. Relying on that promise, they enlist, serve and are injured. As a result of their injuries, they engage in risky behavior that is sometimes criminal. Then we pull the plug and withdraw our promise, leaving these injured soldiers in a much worse situation than they were in before enlistment.

Here in California, several of our statutes mandate the same considerations for active duty service members and veterans. See Penal Code Sections 858, 1001.80, 1170.9. But if treatment for active duty criminal defendants under statutes intended to benefit them may result in their being drummed out of the military without an honorable discharge and its attendant loss of benefits, courts and counsel in California would be wise to ponder this situation. If active duty service members are given the "advantage" of our California statutes, geared toward returning them to the community of law-abiding citizens, and they end up being tossed out of the military without their benefits, we might not be doing them any favors.

The plaintiffs are represented by the Yale Law School Veterans Legal Services Clinic and co-counsel. The allegations are that Navy and Marine Corps veterans suffering from PTSD or TBI attributable to their military service were discharged with less than honorable discharges and were thereafter denied discharge upgrades, affecting their eligibility for veterans' benefits and services. The lawsuit's allegations and evidence were credible enough that a federal court in Connecticut certified the case as a nationwide class action. The court's opinion granting the class action discusses a 2014 memorandum from former Secretary of Defense Chuck Hagel to the military services instructing them to give liberal consideration to discharge upgrade requests from veterans diagnosed with PTSD and TBI. Congress codified Hagel's liberal consideration policy. 10 U.S.C. Section 1553(d)(3)(A)(ii). The Manker judge wrote, however, that "notwithstanding the policy change, the NDRB [Naval Discharge Review Board] granted discharge upgrades in only 15 percent of cases in which PTSD was alleged to have been a factor in characterization."

The Manker opinion also states that the named plaintiff, Manker, developed PTSD from his time serving as a Marine in Iraq, was dishonorably discharged and then denied a discharge upgrade. Another plaintiff, John Doe, also had PTSD from his war service, was dishonorably discharged, and in denying his request for a discharge upgrade, the board stated his PTSD status did not excuse or mitigate his misconduct.

The Yale Law School Veterans legal clinic is also representing Army veterans in another action. Stephen Kennedy v. Mark Esper, Secretary of the Army 2018 WL 6727353. A federal court also certified that action as a class action. In that action, Stephen Kennedy and other veterans of the Iraq and Afghanistan era are suing the Army, Army Reserve and Army National Guard for discharging them with less than honorable discharges when they were suffering from PTSD or PTSD-related conditions attributable to their service. They allege that under the Hagel Memo standards, they should have, but did not, receive discharge upgrades.

Based on allegations in the Manker class action against Navy/Marines and the Kennedy class action against the Army as well as experiences in California courts, there seems to be reason to suspect the military may actually discharge soldiers for misconduct committed as a result of PTSD or TBI. When the discharge is less than honorable, the veteran often loses treasured benefits. It is terribly unsettling that our healthy young people are enticed into military service but not provided full health support when they suffer from PTSD and other conditions acquired as a result of active duty service.

Research from the Department of Veterans Affairs shows that many of the service members who were deployed to Iraq and Afghanistan are returning with serious physical and/or mental health problems. More than half of veterans involved with the justice system have either PTSD, depression, high anxiety or substance abuse disorders. A large percentage of them are also homeless. https://www.research.va.gov/currents/0918-VA-researcher-examines-Vets-who-collide-with-criminal-justice-system.cfm. Many of the symptoms of PTSD relevant for understanding violence risk are dissociative in nature. The theory is that the sufferer of PTSD commits an act of aggression while reexperiencing the trauma. 38 L Humb 1 (2014)

After the Vietnam War, it took us decades to learn how to separate our warriors from our wars. That is, while we don't have to love our wars, we may nonetheless love our warriors. Perhaps it's now time for us to learn how to separate our wounded warriors from military service in a way that does not involve a loss of their cherished benefits. Or, at the very least, we should be able to treat them for the conditions they developed in the military without taking the chance they will lose their hard-earned benefits. 