“I really want to be that group where our colleagues feel sane, scholarly and secure and that encompasses wellness and mental health issues in terms of dealing with the stresses of the job ... getting education to be on the forefront of trends in the law ... and then security in terms of feeling good about what we’re doing,” Judge Rupert Byrdsong explained.

Judge Rupert A. Byrdsong of the Los Angeles County Superior Court will become the 90th president of the California Judges Association in October.

"I'm very excited about leading CJA as we are trying to emerge from a pandemic," Byrdsong said in an interview Friday. "CJA has an opportunity to be available to our members, to be available for all judges rather, to feel normal again and feel connected."

His current focus as vice president of the 2,300-member association is to help support Orange County Superior Court Judge Thomas A. Delaney for the remainder of his one-year presidential term.

"But if I were to forecast and think about what I would like to accomplish, I really want to be that group where our colleagues feel sane, scholarly and secure and that encompasses wellness and mental health issues in terms of dealing with the stresses of the job, scholarly in terms of getting education to be on the forefront of trends in the law ... and then security in terms of feeling good about what we're doing," Byrdsong explained.

"That's pretty broad in general, but if we can accomplish that I think people will be happy," he said. "If judges are happy, I think society and the community will be happy, because everybody knows happy people tend to do their jobs better."

Byrdsong, who presides over an individual calendar court, has been a member of the association since his appointment to the bench by Gov. Jerry Brown in 2014 and is the co-chair of the task force on the elimination of bias and inequity in the justice system and liaison to the California Lawyers' Association.

Succeeding Delaney is special for Byrdsong since their friendship dates back to their early days on the bench when they were in the same new judges orientation class.

"It's special, the fact that we would both end up in the judges association's leadership seven years later," he said.

"I've always enjoyed the fellowship and the benefits of belonging to an association," Byrdsong said. "There's just something about being involved with organizations where you get to interact with your peers, you get to collaborate, you get to network. When you're active, when you participate, you see how valuable these organizations are." 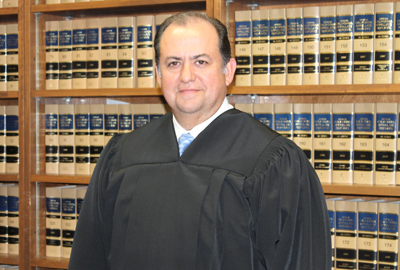