Remedies for the wrongful destruction of trees

Paul is an attorney in Los Angeles. 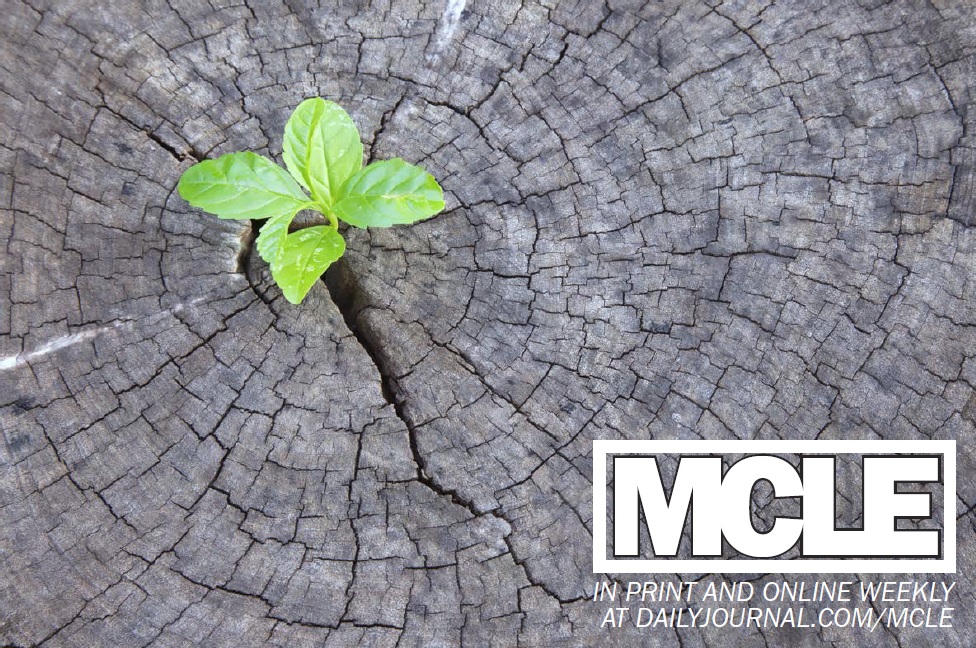 This article discusses causes of action for the wrongful destruction of trees, including a measure of damage that remains untested in a case where a property owner cuts down his neighbor's trees for the purpose of increasing the value of the owner's property. That measure of damage is based upon the theory of unjust enrichment, an equitable remedy intended to deny a wrongdoer the benefits derived from his unlawful actions.

The facts involving the wrongful destruction of trees follow a common pattern. The uphill property owner -- the defendant -- seeks to enhance his view, which is wholly or partially blocked by trees located on downslope property owned by the plaintiff. Typically, the defendant hires a tree cutting service to cut down or trim the trees. No permission is sought before the trees are cut and the defendant is aware that he is cutting trees that are not on his property.

Two California statutes provide specific rules for a cause of action based upon damage to trees and underwood. Code of Civil Procedure Section 733 states in pertinent part: "Any person who cuts down ... any ... underwood, tree, or otherwise injures any tree on the land of another person ... is liable to the owner of such land ... for treble the amount of damages which may be assessed therefor, in a civil action, in any Court having jurisdiction."

"Although neither [Code of Civil Procedure Section 733 nor Civil Code Section 3346(a)] expressly so provides, it is now settled that to warrant such an award of treble damages it must be established that the wrongful act was willful and malicious." Caldwell v. Walker, 211 Cal. App. 2d 758, 762 (1963). "Malice may consist of a state of mind determined to perform an act with reckless or wanton disregard of or indifference to the rights of others. [Citations omitted] Since a defendant rarely admits to such a state of mind, it must frequently be established from the circumstances surrounding his allegedly malicious acts." Id. at 764. In Roche v. Casissa, 154 Cal. App. 2d 785, 788-89 (1957), for example, the defendant knew that the trees which he cut were not on his own land and "disregarded the rights of the adjoining owner" by cutting the trees for the sole purpose of improving his own view. An award of treble damages was upheld. "[D]isregard of [another's] rights ... is the very heart of malice. Caldwell, 211 Cal. App. 2d at 763

Various measures of damage are available to plaintiffs. Where there is a reason personal to the owner for restoring the original condition, or where the is reason to believe that the plaintiff will in fact make the repairs, the plaintiff is entitled to the cost of such repair or restoration, even if it exceeds the diminution in value to his property as a result of the loss of the trees. Heninger v. Dunn, 101 Cal. App. 3d 858, 863 (1980); Hassoldt v. Patrick Media Group, Inc., 84 Cal. App. 4th 153, 168 (2000).

In addition, plaintiffs are entitled to recover emotional distress damages, which are also to be trebled if the conduct by defendants was willful, or otherwise doubled. see also Heninger, 101 Cal. App. 3d at 861.

The problem with these causes of action is that they solely focus on the damage to the downhill property owner. Valuing trees is complicated and filled with uncertainties, especially where the tree is not cut down entirely, but severely trimmed, such as the topping of the tree. Topping is cutting the trunk of the tree and is well accepted as the improper way to trim a tree. These damage measures are also inadequate because, except in rare exception, they do not measure the cost of replacement of the tree but only its value under a theory used by arborist as the "Trunk Formula Method." Most often, the trees that have been cut are of significant size and cannot be replaced because trees of that size are not available and lack of access precludes installation of a large tree. In short, the plaintiff often faces the situation where his mature 50 foot tree is replaced by one that is a spindly six feet and which will take 25 or more years to reach the condition of the destroyed tree.

The alternative measure, diminution in value to the plaintiff's property, is equally difficult to ascertain. While the benefits of a mature trees are well known, such as shade, beauty, privacy and wind break, the absence of that tree is more difficult to value. Real property appraisers are more used to valuing property on the basis of location, square footage and nature of the improvements, and find it difficult to place a value on the absence of a tree.

While these statutes and cases have as their goal the prevention of trees being cut without the owner's permission, they completely fail to take into account the reason the trees were cut: the value obtained by the defendant in having them cut down.

The only cause of action that measures the value to the defendant achieved by cutting down plaintiff's trees is unjust enrichment. In Ghirardo v. Antonioli, 14 Cal. 4th 39 (1996), the Supreme Court held that unjust enrichment is a cause of action and not simply a remedy. The Supreme Court, quoting the Restatement of the Law of Restitution, stated that. "Under the law of restitution, an individual may be required to make restitution if he is unjustly enriched at the expense of another." Id. at 51. A person is enriched if he receives a benefit at another's expense. Id. The term "benefit" "denotes any form of advantage." Id. Thus, a benefit is conferred not only when one adds to the property of another, but also when one saves the other from expense or loss. Even when a person has received a benefit from another, he is required to make restitution "only if the circumstances of its receipt or retention are such that, as between the two persons, it is unjust for him to retain it." Id.

Hirsch, the court stated: "Unlike a claim for damages based on breach of a legal duty, appellants' unjust enrichment claim is grounded in equitable principles of restitution. As a claim in equity, the unjust enrichment claim is tried to the court, not a jury. This allows the court to determine what is equitable in any given case. Much of the evidence to support the unjust enrichment claim is also the basis of the statutory causes of action noted above. The only additional evidence concerns the value of the benefit obtained by the defendant in cutting down the trees. Increases in value are easier to establish as appraisers routinely make adjustments for properties with a view as opposed to those without a view.

While case authority supports the argument that where an adequate remedy exists, unjust enrichment is not to be used, the issue to be determined is what is adequate? Assume, for example, that the damage to the trees are determined to be $7,000 but the benefit to the defendant from cutting down the trees is a $100,000. Bearing in mind that the law expresses a social policy that one may not profit by one's wrongdoing, the equitable result is to evaluate damages on the basis of the benefit the defendant obtained by his deliberate, wrongful, destruction of the plaintiffs' trees. Anything less encourages behavior that leads to a disregard of the rights of the plaintiff and the destruction of trees, not their preservation. 