When duties of candor and confidentiality collide Shawn's practice involves all aspects of litigation, business, and dealmaking. He also focuses on professional liability concerning attorneys, accountants and other business professionals. 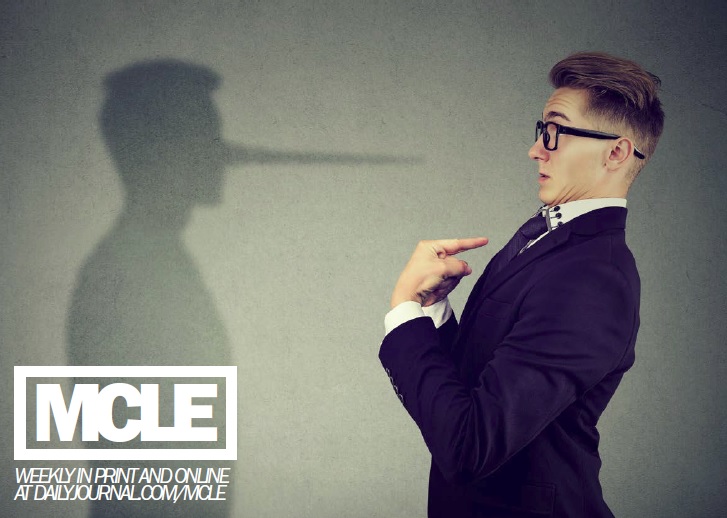 What ethical duties arise when an attorney suspects, but does not know, that a client's witness has testified falsely at deposition, albeit favorably for the client, and plans to testify the same at trial?

How about when the attorney knows, rather than merely suspects, that the same witness has committed perjury, and the attorney's client instructs the attorney to use the witness' known false testimony at trial?

Lastly, what if the attorney first learns of the perjury after the witness has testified at trial, and the client instructs the attorney to continue to use the perjured testimony during the remainder of trial?

The State Bar of California's Standing Committee on Professional Responsibility and Conduct recently published Formal Opinion Number 2019-200 to address these tricky questions. The opinion provides a roadmap for legal practitioners facing competing ethical obligations towards courts and clients. The opinion discusses relevant Rules of Professional Conduct, including: Rule 1.6 (duty to maintain client's confidential information); Rule 1.16 (the duty to terminate representation if the attorney knows or reasonably should know that the client is asserting a position without probable cause or if lawyer knows or reasonably should know that representation will result in violation of the rules); and Rule 3.3 (candor towards tribunal, and remedial measures which can be applied if a lawyer later comes to realize false evidence was provided).

The significance of the opinion is to address how an attorney must proceed carefully in balancing zealous advocacy, "with the duties of candor to the court and client confidentially."

If an attorney only suspects, but does not actually know whether the client's witness testified falsely, then the attorney can ethically present such evidence.

The logic behind this concept is twofold. First, an attorney's duty to vigorously represent clients overrides a merely unsubstantiated concern. People v. McKenzie, 34 Cal. 3d. 616, 631 (1983); People v. Crawford, 259 Cal. App. 2d 870, 874 (1968). And second, incredible evidence can be provided for the fact-finders to determine. Also, and despite not being ethically barred, Rule 3.3(a)(3) states, "a lawyer may refuse to offer evidence ... the lawyer reasonably believes is false."

If an attorney knows of perjury, the attorney cannot present or use the perjured evidence, even if client instructs the attorney to do so.

In addition to Rule 3.3, the opinion cites to Business and Professions Code Section 6068(b) and (d), which state, "It is the duty of an attorney ... : (b) To maintain the respect due to the courts of justice and judicial officers ... [and] (d) To employ ... means only as are consistent with the truth, and never to seek to mislead the judge or any judicial officer by an artifice or false statement of fact or law." Additionally, Business and Professions Code Section 6106 condemns "the commission of any act involving moral turpitude, dishonesty, or corruption." See also Business and Professions Code Section 6128, which provides every attorney guilty of a misdemeanor, "who either: (a) is guilty of any deceit or collusion, or consents to any deceit or collusion, with intent to deceive the court or any party," and In re Branch, 70 Cal. 2d 200, 211 (1969), which held "[a]n attorney who attempts to benefit a client through use of perjured testimony may be subject to criminal prosecution ... as well as severe disciplinary action."

With these rules in mind, an attorney knowing of perjury cannot solicit or seek to introduce the testimony in question, and can refuse to follow the client's instruction to submit the perjured testimony.

In addition to refusing to follow the client's instruction to use testimony known to be perjured, the opinion cites to Rule 3.3, comment [4], which states that "the lawyer should seek to persuade the client that the evidence should not be offered." Indeed, the attorney must remonstrate with the client, explaining the illegality of perjury, potential consequences to the client of sponsoring perjured testimony, and the attorney's own ethical duty to refuse to being party to the same. If, despite remonstration, the client still insists, the attorney must again refuse to carry out the instruction, but may still continue in representing the client so long as the evidence is not offered up. An alternative to proceeding to trial under these circumstances would be for the attorney to withdraw as counsel under the "permissive withdrawal rule" (see Rule of Professional Conduct 1.16(b) and Rule of Professional Conduct 3.3, comment [8]). In the event the disagreement regarding false evidence has caused such a rift that the attorney can no longer competently and diligently represent the client, then the attorney has a mandatory duty to withdraw, pursuant to the standard rules regarding reasonably necessary disclosure, and taking reasonable steps to avoid reasonably foreseeable prejudice to the rights of the client. Rule of Professional Conduct 1.16(d).

What to do if an attorney first learns of perjury after the witness has already testified at trial, and the client insists on no corrective action, as well as the subsequent use of the perjured evidence

When an attorney subsequently learns of perjured testimony after the witness has already testified at trial, and the client is being uncooperative in not wishing to take corrective action, while insisting to the subsequent use of perjured evidence, the acting attorney must proceed with intense caution.

According to the opinion, the ethical dilemma posed here is prompted by "the collision" of the duty of candor (Rule 3.3, candor towards tribunal) and the duty of confidentiality (Rules 1.6(a), 1.8.2, and Business and Professions Code Section 6068), because now the attorney's knowledge of the perjury constitutes a "client secret." As the opinion establishes, client secrets are broader than attorney-client privileged information, and include "any information obtained by the lawyer during the professional relationship, or relating to the representation, which the client has requested be inviolate of the disclosure of which might be embarrassing or detrimental to the client."

Ultimately, because the client has instructed the attorney not to disclose the testimony being false, the attorney cannot do so. The attorney must first remonstrate with the client, as opposed to first seeking to withdraw from representation. In remonstrating first, Rule 3.3, comment [5] calls for remonstration to not only include explaining to the client the lawyer's obligation under the rule, but also where applicable to explain, "the reasons for the lawyer's decision to seek permission from the tribunal to withdraw," and again urging the client to take corrective action which would absolve the need for the attorney to withdraw.

While the opinion leaves the door open on whether it would be appropriate, for instance, for the attorney to unilaterally move to strike the perjured testimony over the client's objections or continue to represent the client at trial without referring or relying upon the perjured evidence, the law of least risk (and exposure) suggests the safer move would be not to do so, and instead withdraw from representation.

Finally, if the withdrawal motion is denied, the attorney must not refer to or rely upon the perjured testimony throughout the remainder of the case. See Formal Opinion Number 1983-74.

Formal Opinion Number 2019-200 highlights the various landmines an attorney must avoid when servicing clients and dealing with potential and actual knowledge of perjury, in light of a civil trial. The attorney must not be complicit in misleading the court at the risk of facing not only disciplinary action, but also criminal liability. What lies at the heart of this all is a struggle to balance an attorney's obligation to the client, versus that to the court.

While the American Bar Association's Model Rules, and jurisdictions following the model rules, lean in favor of candor towards the court system (see Model Rule 3.3(a)(3) which allows as a remedial measure for evidence known to be false, the option of "if necessary, disclosure to the tribunal"), the California Rules of Professional Conduct deviate in disallowing disclosure of the known, perjured testimony, as an option altogether. In this way, and similar to many other California ethics opinions, protection of the client remains paramount. 