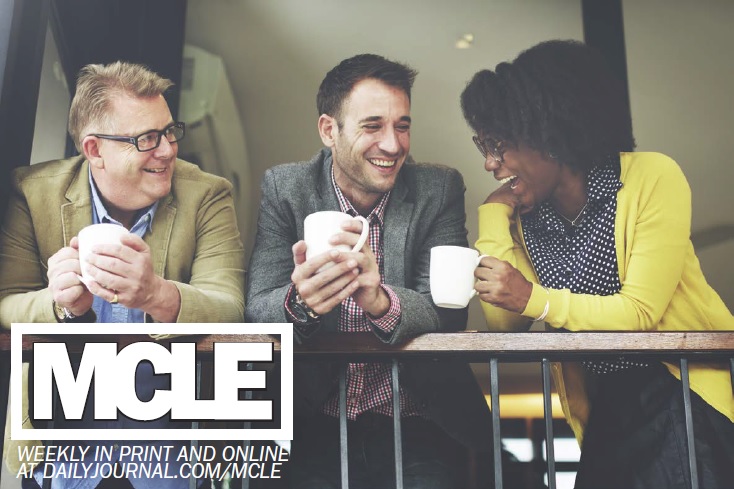 Practicing law for any length of time in communities, large or small, will ordinarily result in personal relationships with opposing counsel. A recent ethics opinion by the American Bar Association examines intimate relationships, friendships and acquaintances with opposing counsel in deciding when a "material limitation" conflict arises that requires client consent. California's Rules of Professional Conduct offer a more straight forward approach to personal relationship conflicts with other counsel that keeps lawyers from having to wade deep into the weeds in deciphering the indicia of varying relationships.

The issue for conflicts purposes is whether a significant risk exists that the representation of a client will be materially limited by a personal interest of the lawyer. Cal. Rule of Professional Conduct 1.7(b) (ABA Model Rule 1.7(a)(2)). Personal interest conflicts may arise as a result of a lawyer's personal relationship with opposing counsel as they might by virtue of relationships with parties and witnesses. Lawyers must determine whether the nature of the relationship creates a Rule 1.7(b) conflict, and, if so, whether the lawyer reasonably believes the lawyer will be able to provide competent and diligent representation to each affected client, who then must consent to the representation.

Comment [11] to ABA Rule 1.7 advises that when lawyers representing different clients in the same or a substantially related matter are closely related by blood or marriage (e.g., parent, child, sibling or spouse), there may be a significant risk that a client's confidences will be revealed and the lawyer's relationship will interfere with the lawyer's loyalty and independent professional judgment, such that client consent is required. The ABA rule is silent with respect to other types of personal relationships with opposing counsel; hence, the reason for ABA Formal Opinion 494 (2020). The opinion points out that not all personal relationships with opposing counsel create a conflict that requires disclosure or client consent and that certain relationships may trigger a duty of communication to keep the client reasonably informed about the status of the matter. ABA Model Rule 1.4(a)(3). In determining whether a personal interest conflict exists, the opinion suggests that the lawyer's role in the matter should be considered. The opinion also notes that personal interest conflicts ordinarily are not imputed to other lawyers in the firm. See ABA and California Rule 1.10(a).

In delving into the distinctions between intimate relationships, friendships and acquaintances, the ABA committee relies heavily on ABA Formal Opinion 488 (2019). That opinion addresses the three categories of personal relationships between judges and lawyers or parties that may require recusal or disclosure under the judicial canons. The issue in ABA 488 is preserving judicial impartiality and avoiding an appearance of impropriety. The committee concludes that the risks that arise when opposing counsel are related by blood or marriage are also present when there are close personal or intimate relationships between counsel. According to the opinion, lawyers who cohabitate in an intimate relationship, are engaged to be married, or who are in exclusive intimate relationships should be treated similarly for conflicts purposes. Because friendships exist in a wide variety of contexts, the committee concludes they "may be the most difficult category to navigate." Relying on the discussion of friendships in ABA Formal Opinion 488, the committee distinguishes indicia of "close friendships" that require disclosure and, ordinarily, informed consent and friendships that might require only disclosure. Friendships and other relationships that fall into the category of acquaintances need not be disclosed, nor is client consent required. The opinion concludes by suggesting that disclosure of personal relationships with opposing counsel may be advisable even if not mandated to maintain good client relations.

The two-step process in evaluating a lawyer's personal relationships with another party's lawyer derives from former Rule 3-320, which required that a client be informed in writing of the relationships identified in current Rule 1.7(c)(2) whether or not the relationship gave rise to a conflict of interest. Under the current rule, lawyers must first determine whether the nature the lawyer's personal relationship with another party's lawyer creates a conflict under Rule 1.7(b), requiring client consent and compliance with Rule 1.7(d). Rather than focusing on the intricacies between intimate relationships, friendships and acquaintances, Rule 1.7(b) requires an objective analysis whether the personal relationship poses a significant risk that the lawyer's ability to consider, recommend or carry out an appropriate course of action for the client will be materially limited. Rule 1.7, Comment [4]. The analysis is viewed from the perspective of a reasonably prudent and competent lawyer. A significant risk exists if the relationship is sufficiently close that it would raise questions in the mind of a reasonable lawyer as to whether appropriate action (such as seeking sanctions against opposing counsel) will be vigorously pursued in advancing the client's interest. The lawyer's role in the matter and the scope of the representation are relevant factors. Whether a subordinate lawyer's personal relationship with a junior lawyer on the other side poses a significant risk will be evaluated differently than a close personal relationship between lead counsel on the same case. A dating relationship between defense counsel and the prosecutor in a criminal prosecution would foreseeably have more serious consequences if not disclosed. See People v Jackson, 167 Cal. App. 3d 829 (1985) (conviction reversed). Even if a material limitation conflict does not exist, the lawyer must disclose the relationships identified in Rule 1.7(c)(2) to the client in writing.

California's disclosure obligation in the absence of a material limitation conflict is more encompassing than the ABA rule and requires less guess work. First, the rule addresses personal relationships with counsel for another party and not simply with opposing counsel. Second, the relationships are identified in the rule and not in a comment or in an ethics opinion. Third, requiring written disclosure where another party's lawyer lives with the lawyer eliminates the need to evaluate the degree of intimacy or affinity between counsel. Fourth, the definition of "matter" in Rule 1.7(e) better enables lawyers to determine the circumstances in which disclosure is required. Finally, disclosure of personal relationships other than those identified in Rule 1.7(c)(2) may be required under Rule 1.4(a)(3) if the relationship is a significant development relating to the representation.